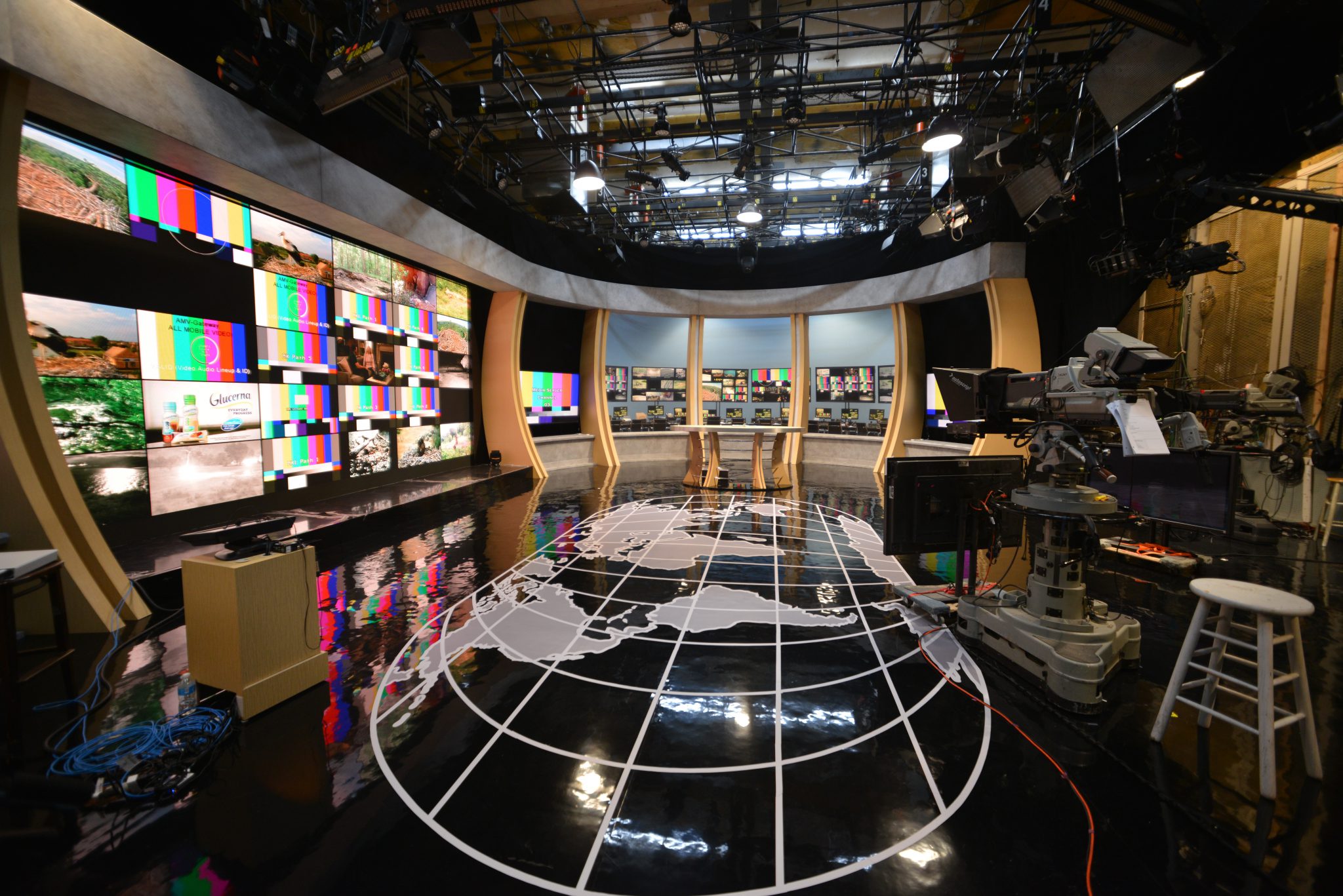 National Geographic has built its reputation on capturing beautiful imagery of wild animals in their natural habitats. Following the recent telecast of “Earth Live,” the network can add “live broadcast specialist” to its list of brand capabilities. Over the course of the two-hour program, cinematographers transmitted live footage of wildlife and ecosystems from dozens of locations around the world. The production teams used cutting-edge technology including thermal imaging systems and ultra-low light cameras from Canon to showcase a number of wildlife firsts.

“Earth Live” was anchored in a New York City studio by hosts Jane Lynch, Phil Keoghan and zoologist Chris Packham, who kept the action moving. The two-hour event gave viewers an unfiltered, real-time broadcast feed of Earth’s wildlife in various natural habitats with the use of 51 cameras shooting simultaneously in 28 locations across six continents.

The brainchild of executive producer Al Berman, “Earth Live” was designed to bring the kind of excitement and immediacy to a wildlife show that the live TV veteran had done for the “CBS Evening News,” a plethora of sporting events (including the 1998 Winter Olympics in Nagano, Japan), “Survivor” and decades’ worth of other live telecasts.

To understand how this project came together, we have to back up two years. The idea of producing a live nature documentary spanning the globe had been percolating in Berman’s head for a while but there had always been a significant, even prohibitive challenge: a substantial number of locations would be shrouded in darkness at any given time. To fudge it with lights would undermine the concept, and to rely on the imagery of traditional night vision and thermal cameras would compromise the spectacle.

It was Canon’s introduction of the ME20F-SH camera, with a claimed potential ISO of 4 million (with gain pushed to the limit), that changed his thinking. “They said you could shoot at .05 lux or under a quarter moon without any additional illumination,” Berman recalls. “I thought that sounded ridiculous, so I reached out to [Canon senior fellow] Larry Thorpe and asked to test it.”

Thorpe obliged and Berman went out to shoot a pre-arranged test: a toy lion lit only by the moon. “I could barely see anything, but on the monitor, you could just see it! It looked like daylight,” Berman says. He tested the camera further at Wildlife Waystation, an animal sanctuary in Los Angeles County, and decided the camera’s sensor could capture images rich enough show to National Geographic and pitch his idea.

He recounts his meeting with Tim Pastore, National Geographic president of original programming and production. Pastore was also excited by the potential this kind of low-light sensitivity could open up. Berman had suggested a live broadcast from a few select regions, and Pastore upped the ante in his reply: “What if we did the whole world?”

When Pastore asked how long the show should be, Berman says he asked, “How much money do you have?” Berman continues, “He gave me a number and we did a fist bump!”

“My approach was to hire the very best in every field: the best tech keys, the best director, producers, wildlife experts,” Berman says. “Nobody had ever done exactly what we were attempting, so it was very important to have the best, most experienced people figuring out how to do it.”

He teamed with Plimsoll Productions, a UK-based production company that specializes in non-scripted shows, and with Bunim/Murray productions, the company that could be credited with inventing reality television with shows such as “The Real World” and “Road Rules.”

The Canon camera underwent additional testing in the Sabi Sands of South Africa’s Kruger National Park as part of a safari organized by the company Wild Earth, which produces the live streamed YouTube series “Safari Live.” Frequent collaborator, technical expert and producer Gayle DePoli worked with Berman to supervise the testing of the camera, which was mounted with Canon’s Cine-Servo 50-1000mm (T5.0-8.9) lens. In the field, the cameras would use a variety of Canon optics. “The most important thing we wanted to learn was how much to dial up the dB,” says Berman. The magic number seemed to be +48 dB: “That was enough light to make the [images] look almost like daylight. If you cranked it any higher, it was too grainy,” Berman adds.

The ME20F-SH camera, dubbed the “Moon Cam” by cinematographers during the live production, was perfect for night coverage of lions in Kenya or hyenas in Ethiopia. It was also deployed in locations that would pass from dusk through night during the telecast, as in the case of the Bracken Cave in Texas, where more than 20 million bats fill the skies at magic hour.
Not all the locations required that kind of light sensitivity. Locations that would be shot during the day would be covered with an amalgam of gear, primarily chosen by that location’s DP, including Sony PMW-F55 and PDW-F800 cameras and an assortment of Panasonic VariCams. The producers had great flexibility so long as the cameras could output 720p for the live broadcast. In many cases, the shooters were also capturing additional material in a variety of formats on external recorders. Although “Earth Live” was broadcast live, recording and creating B-roll package for playback started days earlier.

While all the remote setups were complex, there were some that were particularly challenging. Berman points to the lions, which would be shot on the savannahs of Maasai Mara National Reserve in Kenya by Sophie Darlington. “People don’t shoot lions at night,” Berman says. “Sometimes with infrared, but this was really something new with a lot of unknowns. We put additional vehicles out there with the crew because if one got stuck, then they’d be out there in the middle of the grasslands, two hours from base camp, in a stuck vehicle with lions. That was a significant consideration.”

In addition to enacting safety measures on the location shoots, producers had to devise a plan to transmit video signals from these remote locations to the New York control room. AMV (All Mobile Video) was involved in a lot of the transmission solutions, and the live production was all done through an AMV studio facility in Manhattan.

To capture footage of humpback whales off the Alaskan coast, AVS brought in an aircraft with a Cineflex gyro-stabilized camera mount as well as a boat and two drones. Wireless feeds from all the cameras were picked up on the boat and switched out to an uplink on the nearby shore. “It was very complicated,” Berman recalls.

The Fiji location was one of the most complex, as cinematographer Andy Casagrande would be following bull sharks live underwater. During this segment, MX1 would receive the feed on a boat and transmit it back to the studio via microwave to flyaway using multiple satellites. Over the course of “Earth Live,” seven feeds (two from Africa and Europe and three from North America) were statmuxed at MX1 facilities and transmitted to the AMV studios in New York City for live studio integration with the broadcast.

“Even the comms were extremely challenging,” Berman adds. Many of the remote setups were far from cell range. The team approached each setup differently, using cell service where possible or direct satellite bandwidth to communicate from the studio to the camera crews and various combinations, as well as Wi-Fi, for crew to communicate with one another within a location.

On the night of the telecast, AMV’s main transmission room brought in the feeds from around the world. Director Glenn Weiss, director of the Academy Awards, Tony Awards and the most recent Democratic National Convention—essentially some of the most high-pressure, complex gigs a live director can get—called the shots in the control room. Berman was stationed in the main control room with Weiss.

The show was scripted, but the idea of being able to cut to “breaking news” was part of the excitement. “Say an ocelot shows up,” Berman explains, noting the animal’s propensity for shyness. “We’d put the feed of the ocelot into the router and maybe we’d have the wolverine on another. We would organize them with the ones we expected to be up next, but we always had other possible locations on standby.”

The hosts brought their best improvisational skills to the telecast as they would need to be flexible to accommodate the vagaries of live production. Occasionally they would cut to clip packages assembled from prerecorded B-roll—Berman explains that these pre-built clip packages weren’t there for the typical reasons live broadcasts use them, however. “We could always go to another location, so we didn’t need them to fill time. But if we’re going to be showing the Maasai Mara National Preserve in Kenya at night, the audience won’t see it in its glory. They’re not going to see a lion bringing down a wildebeest. So we had these short packages—nothing more than 45 or 50 seconds—to give viewers a sense of the place and some context.”

While Berman, DePoli and a few others had seen Canon’s ME20F-SH in action, many of the shooters had literally just gotten the cameras before the project began. They shared their reactions to its low-light capabilities as they were working. “Sophie Darlington was in Kenya with the lions,” DePoli recalls. “She could hardly see anything in front of her it was so dark, but on her monitor she saw a mother lioness nursing her cubs. Bob Poole was in Ethiopia with the hyenas. All he could make out was the reflection in their eyes. On the feed, it almost looked like daylight!”

Berman went into the production knowing that uncertainty was the only certainty. The planned shoot of the flamingos of the Yucatan had to be scrapped when the birds unwisely chose to migrate to an area infested by crocodiles. Even where they had a potentially excellent setup, there was never a guarantee the animals would behave as expected.

National Geographic photographer Steve Winter was tasked with delivering footage of the rare and elusive ocelot from Brazil for “Earth Live.” “We kept waiting for an ocelot to show up,” Berman says. “We could have easily had a broadcast with no ocelot after investing a considerable amount of money in having one. It was a calculated risk. One column of our spreadsheet was for risk factor.”

When the broadcast finally ended and the credits rolled, Berman says, “You had to pull everybody off the ceiling! There was so much shouting and screaming and hugging. People were crying in the control room. Everybody was just so proud.”