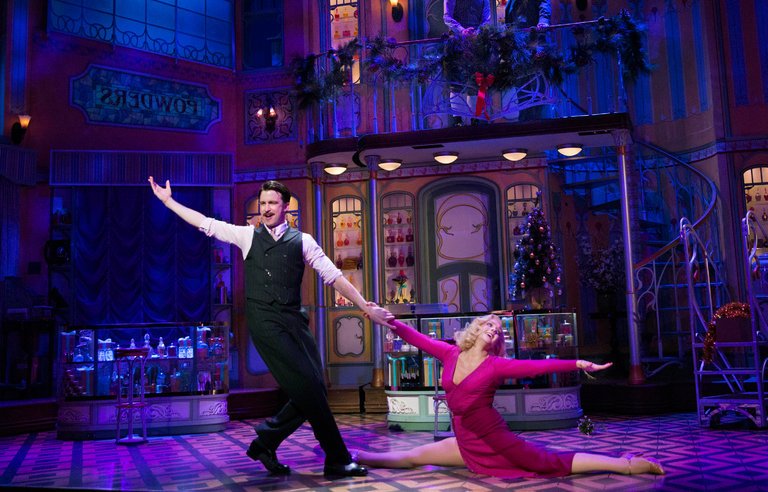 The Metropolitan Opera has been transmitting performances live for a decade. The National Theater in London jumped on board a few years later. But Broadway, facing both financial and philosophical obstacles, has been slow to join the trend.

Now, after years of start-and-stop progress, Broadway is passing a milestone: On Wednesday, the nonprofit Roundabout Theater Company, which with three Broadway theaters is one of the industry’s most prolific producers, said it had agreed to allow a live stream of a much-praised musical revival, “She Loves Me,” which is running through July 10 at Studio 54.

The event will be streamed by BroadwayHD, a new company seeking to broadcast theater performances, on June 30. It will be the first time a Broadway show has been streamed live, the company said. Unlike the broadcasts by the Met, the National Theater and several European opera and ballet companies, it will be available not in movie theaters but on the internet, Roku and Apple TV.

“I think it will create more interest in Broadway,” said Todd Haimes, the longtime artistic director of the Roundabout. “There used to be this feeling, if a movie was made of a Broadway show, that would kill the Broadway show. Then something happened. It was called ‘Chicago.’ They made the movie, and the ‘Chicago’ sales went through the roof.”

The theater industry has been inching in this direction for years. There have been broadcasts on PBS (a Roundabout production of “The Man Who Came to Dinner” was shown in 2000) and on commercial television (“Legally Blonde” was once on MTV). Post-closing broadcasts were screened in movie theaters (“Of Mice and Men” was shown in cinemas by NT Live, the National Theater’s program), and, recently, Off Broadway shows (“Buried Child,” at the New Group, and “Old Hats,” at Signature Theater) have been live streamed by BroadwayHD.

But the complications are daunting. Theater is a highly unionized industry, and figuring out how to compensate performers and creators has been hard. Despite widespread evidence that broadcasts increase ticket sales, many producers remain concerned about discouraging potential ticket buyers. And it is not clear whether any individual broadcast can be profitable. (The Met Opera, the National Theater and the Roundabout are all nonprofits.)

“The most difficult part of this is the cost — everyone has to get compensation — and the challenge is determining the value of the live stream,” said Ken Davenport, a producer who last year streamed a performance of an Off Broadway musical, “Daddy Long Legs.” He said the broadcast was watched by about 150,000 people, and built buzz for the show, but was not profitable.

Mr. Davenport said that as technology has improved, the value of broadcasting theater has increased. “It will never replace live performance,” he said. “The theater has survived the radio, the television, the internet and every other form of entertainment out there. But for people that can’t experience it live, it’s a great first taste.”

Nonprofit institutions with subscribers have an incentive to support the broadcasts both as part of their mission — to reach wider audiences — and because they are building long-lasting brands. For commercial producers, the calculus is different.

“It’s definitely much harder there, because there is an expectation that it has to be a success immediately,” said Emma Keith, the head of NT Live in London. “Here, everybody was happy to say, ‘Let’s take a risk, and it might take time to generate profits,’ whereas on Broadway it has to make money from Day 1.”

Every week, stay on top of the top-grossing Broadway shows, recent reviews, Critics’ Picks and more.

Nonetheless, interest appears to be growing. “We see it as a great opportunity to have an additional revenue stream to the actors, and it also helps to raise the profile of American theater,” said Lawrence Lorczak, a senior business representative at Actors’ Equity.

The actors in “She Loves Me,” who include Laura Benanti, Gavin Creel, Jane Krakowski and Zachary Levi, will be paid extra, under contracts by both Equity and SAG-Aftra, for the broadcast of their work. BroadwayHD also had to reach agreements to compensate the authors of the musical (or their heirs, since some of them are no longer alive).

Ms. Benanti said she welcomed the decision to broadcast the production. “The theater is such a vitally important part of our culture,” she said in an email. “The more people able to experience it, the better off we will all be.”

“She Loves Me,” which was first presented on Broadway in 1963, is a much-loved musical with music by Jerry Bock and lyrics by Sheldon Harnick, who are best known for “Fiddler on the Roof.” Adapted from a Hungarian play that also inspired the film “You’ve Got Mail,” “She Loves Me” is about lovelorn parfumerie workers in Budapest who feud and flirt (and sing and dance).

The “She Loves Me” broadcast is being financed by BroadwayHD. Roundabout said it is spending nothing on the venture — in fact, it will receive a small amount of compensation.

The founders of BroadwayHD, Stewart F. Lane and Bonnie Comley, said that the broadcast would be costly but that they were optimistic it would be profitable. The stream will cost $9.99 to watch on the website, or is free to BroadwayHD subscribers. At some point, it will be available through BroadwayHD’s on-demand library.

Mr. Lane and Ms. Comley said they chose “She Loves Me” because of the quality of the production, because its cast members are well known, and because they had been looking to work with Roundabout, hoping to forge a continuing relationship with a producing entity that presents multiple theatrical works.

Making the broadcast will require nine or 10 cameras in the theater for three performances (two are to test camera angles, lighting, and sound). Some seats will be left vacant for the cameras (“killed,” in industry parlance), and audience members who are unhappy with the camera presence will be allowed to exchange their tickets, although many people welcome the opportunity to be at a performance that is broadcast.