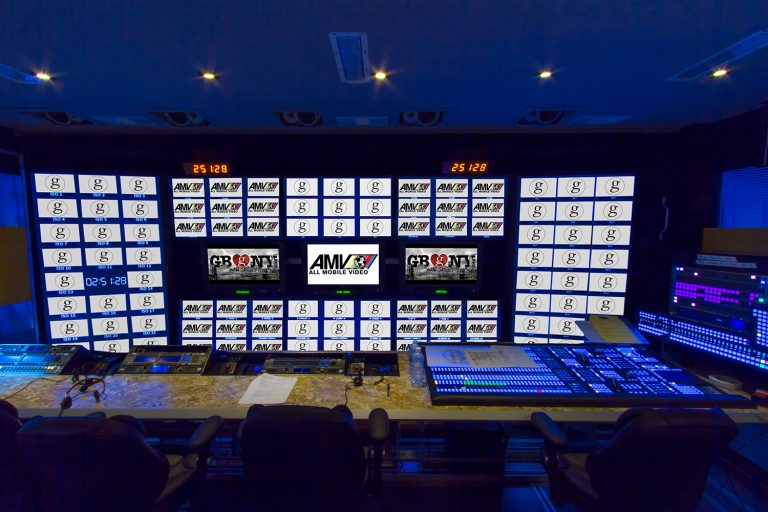 In what is thought to be the largest-scale multicamera switched 4K/UHD production ever in North America, All Mobile Video and Mobile TV Group combined to deploy 27 4K cameras to produce Garth Brooks’ pair of concerts at Yankee Stadium this month.

The production featured a pair of control rooms inside AMV Zurich A and B units and Mobile TV Group 39 Flex truck to handle 27 camera feeds across two 4K/UHD switchers, with 27 4K cameras recorded across a variety of recording and SAN storage devices.

“All show elements, cameras, LED screens, IMAG screen switching, and playbacks needed to be in 3840×2160/60p UHD 4K,” says Tom D’Angelo, director, AMV. “Due to the number of cameras being shaded and the need for a separate 4K switcher handling IMAG [responsibilities], Mobile TV Group’s 39 Flex was brought in. [This allowed us] to avoid shading 27 cameras from one truck and to facilitate the screen switching.”

“Standard stadium wiring was in locations typical for baseball coverage, not a concert,” says D’Angelo. “The Garth Brooks stage was huge, filling nearly the entire ballpark outfield, and, therefore, the majority of our cameras needed to be in the outfield, not in the stands.”

Given the still-bleeding-edge state of 4K multicamera production and the sheer volume of video files created by 27 4K cameras during two nights of three-hour concerts, D’Angelo and company soon realized that they would need to concern themselves not only with onsite production planning but also with data management and postproduction planning.

“This resulted in a technical plan that allowed us to record each 4K/60p signal and have those files replicated to three different storage solutions nearly simultaneously,” says D’Angelo. “This allowed production to have nearly real-time ‘protection copies’ of each camera, to then be geographically separated.”

Typically, AMV would deploy a separate audio multitrack truck onsite for an entertainment special of this magnitude. However, for the Garth Brooks concert, all audio was mixed and multitracked in AMV Zurich’s audio room, which features a Studer Vista 10 digital audio console and 2×128 channels of ProTools record, rather than a separate audio truck.

“This was an extremely ambitious 4K production and we are thrilled to have joined All Mobile Video in providing mobile unit facilities,” says Nick Garvin, director of business development, Mobile TV Group. “It is a credit to all the engineers involved that it went so perfectly.”